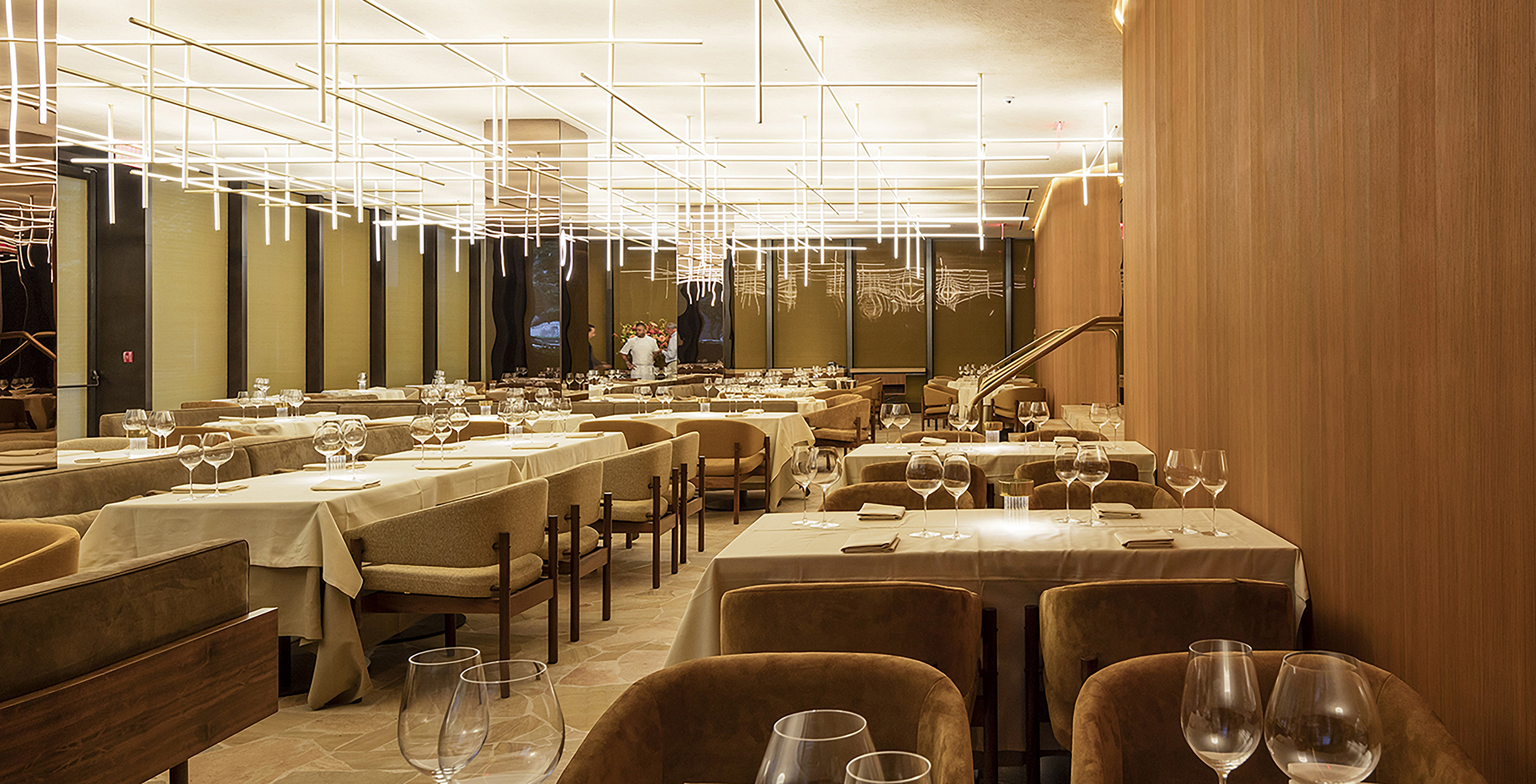 The target designing the new Four Seasons Restaurant at 280 Park Avenue was to create the magical atmosphere the original Four Seasons Restaurant by Philip Johnson had, yet designing at the XXI Century and exploring the possibilities offered by the entirely different spaces of the new premises.
Much of the greatness of the original Four Seasons Restaurant referred to the symmetry of the space and its perfect proportions. Here, the boundaries of each space is defined making sure they are at the perfect proportions too.
One problem at the original Four Seasons Restaurant that could disturb the operation was that there were two restaurants – the grill room and the pool room, with two different ambiences as well as different menus. The bar was adjacent to the grill room and the pool room used to be close to regular customers when hosting events.
Now there is the chance to create distinct spaces for district operations – bar, restaurant and events – connected by a golden passageway.
The customer procession starts at the dark entrance hall and coat check – a brown rich-veined marble cave.
A lively square-shaped room comes next, clad in wood and resting on a limestone floor, with a bar in the centre and tables sofas recessed in bronze mirror niches surrounding it. Along the glazed facades, the glass blown beads curtain glimmer slightly.
After experiencing the bar vitality, the inviting entrance draws customers into the golden passageway along which they are led to the restaurant. Two discreet doors at the side walls access the two private events spaces. Ending the passageway, three steps drop the customer down to the restaurant arrival landing, an elevated platform from where customers can see and be seen from every table before stepping down to the dining room itself, where the colours and materials create a most vibrant and contemporary atmosphere.
Curved walls open to the rectangular jewellery box clad in bronze-coloured mesh made of knitted metallic yarns mounted in panels between the mullions – they filter the light that enters from the glass facades. The floor is a combination of three type of marble pavers in large formats laid in irregular pattern. From the soft fluffy ceiling hangs a light fixture of brass tubes designed by renowned light designer Michael Anastassiades.
Round and square tables on the perimeter for two and four guests, with a special edition of Senior dinning chair, from Brazilian designer Jorge Zalszupin.
On the center, a layout containing sofas designed by Isay Weinfeld, with three different shapes and different heights, along with leather and linen.
The distinct characters of bar and restaurant find its expression on the balance between the glass blown beads, painted one by one by traditional artisans in Bohemia that form the bar curtains and the high technology metallic fabric knitted by machine at the Textile Lab in South Netherlands applied on the restaurant perimeter.