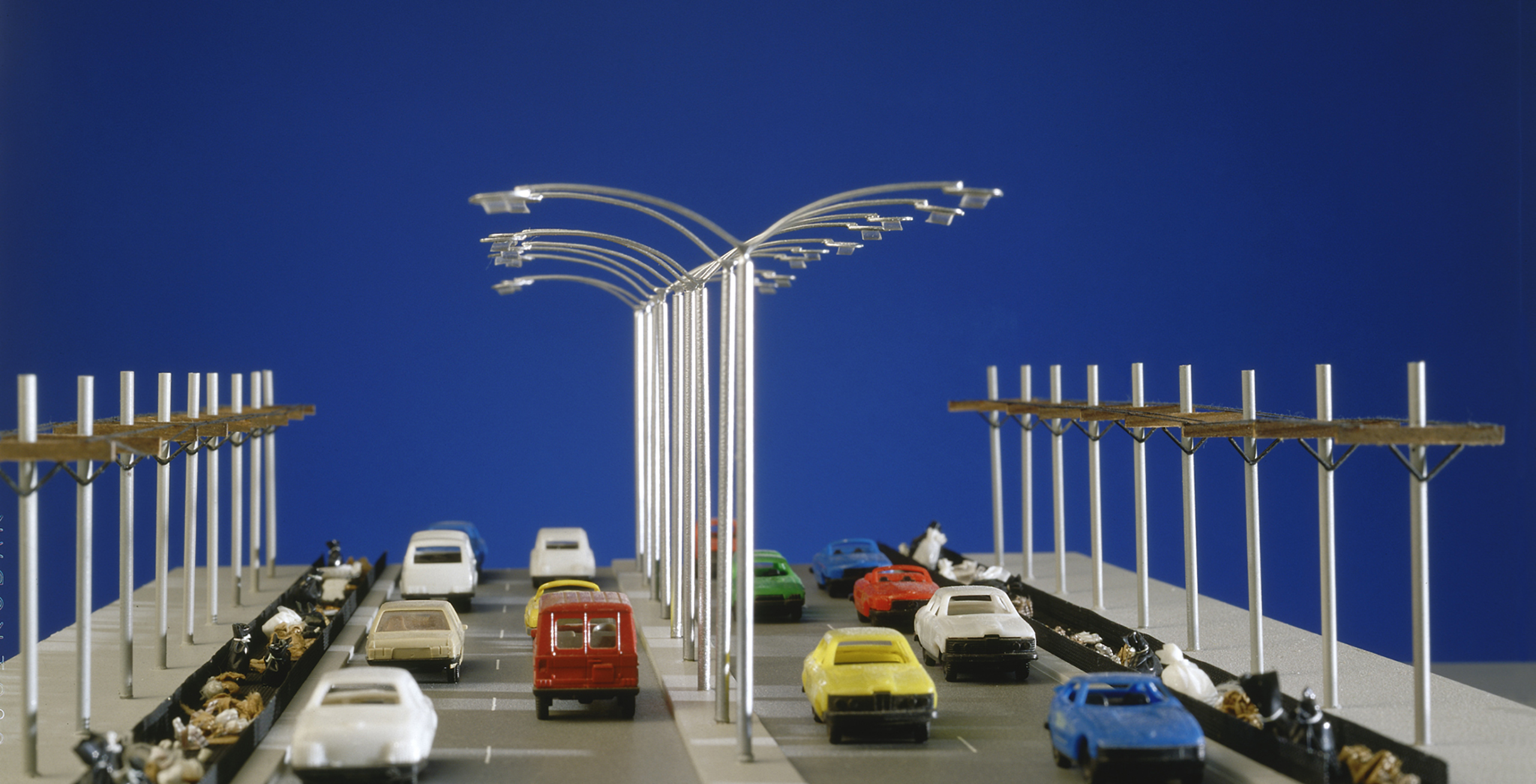 The architectonic and urbanistic proposals presented at this exhibit attempt to translate our society’s old anxieties trough a critical and realistic view.
This city | São Paulo is constantly forced to civilize itself; in doing so, it often rubs against the temperament of its inhabitants. Solutions imported from the First World are not well accepted by the population. Implementing pedestrian crosswalks, for example, is an act of pure provocation. They are always placed in the wrong places, exactly where the pedestrian prefers not to traverse thus hindering drivers at the crossings.
People feel humiliated by having to walk one or two meters with paper rolled up in their hands to get to a waste bin. So, with these people in mind, we designed the “Lixovias” (Waste Express Ways). They will make the simple gesture of throwing trash on the ground a civilized act.
Does no one understand that cleaning the lake in Ibirapuera Park would ecological balance and loosen incurable attacks of chronic rhinitis upon its geese long accustomed to its filthy water? Furthermore, planting a tree is simply a pretext to surround it with advertising. It might as well be a post, for all the difference that would make.
How long will the cynicism of our authorities, who insist on depolluting the Tiete River, continue? With a bit of luck, in a few years we may find a robust salmon in the new river, embarrassed to see – through the crystalline water – the old slums along the banks.
What does all this mean? Just this. In our exhibit we are trying to collaborate, quite humbly, with some suggestions that will add to this city’s true calling: chaos.

AIR-BORNE RESIDENCE
Inspired by the most modern airports in the world, this residential building offers its residents a security system never before seen.
On arriving at this condominium, park your car at the private departure gate, unbuckle your safety belt and, through a tunnel, you will access your warm, inviting apartment. Using this procedure, you evade any contact with the outside world and raise barriers against assault, kidnapping, rape and, mainly, car watchmen.
Another big advantage is not having come across any of yours neighbors.

BELT WAYS
Our streams and brooks cannot be forgotten. For this reason for the project would install rolling beltways, covered by glass tunnels, over the streams draining into the Tietê River. They are the connections between the city’s various districts and the Bâteaux-Mouches piers. This sight-seeing boats are air conditioned and sound proofed so that no outside noise will perturb. The best quality classical music may be heard constantly, interrupted once in a white so that the sonorous voice of the official of some international airport can give us information and statistics on the modern favelas installed on the land along the streams. “Pour Elise”* is banned from the sound track so that the people of São Paulo, who quickly learned who Beethoven is, will not commit mass suicide on hearing it.
*The tune bottled gas delivery trucks play to advise consumers needing gas that they are nearby.

MOVING CROSSWALKS
For those that have the habit of stopping their cars on crosswalks for pedestrians, here is some relief.
Using advanced technology, liquid crystal strips will be installed in place of the traditional walks. By means of delicate computer sensors, these walks will broaden or narrow so as never to encroach upon the car’s space.
To the relief of drivers, this sensational project will surely end, once and for all, the disagreeable sensation of always breaking the law.

A NECKLACE, EARRINGS, AND A BELTWAY
The position of the high ranking persons in the government of São Paulo, veritably the cream of the crop of urban thinkers, has been thoroughly criticized.
They seem to be preoccupied only with viaducts, expressways, clover leafs, all in detriment to an efficient collective transport system. All right. We fully agree with that.
Why implement a fast and efficient transportation system like the Subway, when you know the last stop will never be Kew Gardens?
This intrincate road junction has an estimated cost of US$927 million and will be built on an idle area of the city, the Ibirapuera Park, connecting Avenida 23 de Maio to itself.
It is a vision project, as it should relieve the intense traffic of the region for the next 6 months.

EXPRESSWAY
This is another proposal that does not depend on the cleaning of the river. All one needs to do is cover it with an asphalt slab. So that people, on their way to work, will not have to waste time with the disagreeable slowness of the boats, we are proposing high speed lanes, going both ways, that can be traversed by boats, launches, jet-skis, etc. They will be wheeled, but not be our cars and buses. So that we can still have the clear impression that we are on a boat, the track cannot have any holes, even though we already know that would make it difficult to do. We plan to propose divisions in the track to separate passenger boats from common ones; this would be inspired on the Avenida Santo Amaro project, which, in our view, is one of the most beautiful and well designed projects ever carried out in the third and fourth worlds.
The great advantage of this proposal is that eradicates, once e for all, the problem of flooding, as well as all the campaigns and seminars we will have to put up with until the river is cleaned.